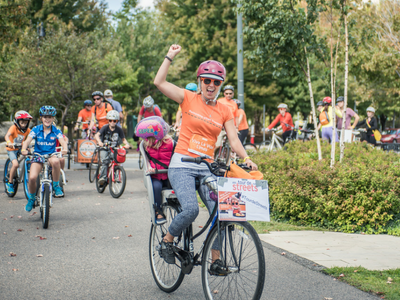 ach year, when we get the photos from Tour de Streets, we look for it: the picture of a triumphant looking woman, one arm raised as she rides with her young daughter on the back of her bike. The daughter is growing up, but the pose never changes. Julia Wallerce’s enthusiasm for creating livable streets and communities is contagious, and in 2017 her team Viva la Vida Lynda was our top fundraiser.

Although Julia has been riding at Tour de Streets since its inception, 2017 was a particularly poignant year. Her mother Lynda had passed away the previous fall and the event took place on what would have been her mother’s 68th birthday. It felt natural to rally her team around a celebration of her mother’s life and spirit -- a woman who felt most alive when hiking, walking, dancing, and socializing in public spaces. 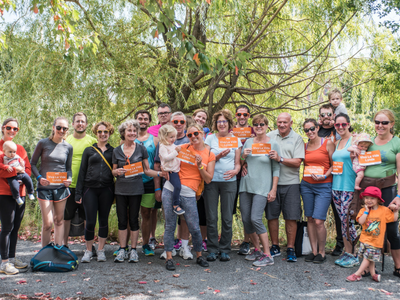 People who knew her mother appeared out of the woodwork to join Viva la Vida Lynda -- hiking pals from the Bay State Trekkers group, and others that Julia had never met. "This outpouring of support was overwhelming and also such a perfect tribute to my mother’s life."

Meanwhile, the next generation of street ambassadors continues to grow up. Julia says that her daughter Maya, age 4, now boasts to her school friends that she and her mother are the ‘bike leaders’. When they get in the car she admonishes her parents: “We’re making the air dirty!”

As the Boston Program Manager at the Institute for Transportation & Development Policy (ITDP), Julia is working on demonstrating elements of Bus Rapid Transit (BRT) in Everett, Arlington, Cambridge and Watertown with hopes of leading up to a full scale BRT corridor in the Boston region. She says that a city that is built for the most vulnerable will be better for everyone, and it doesn’t need to be a fight: “We’re focusing on the positive and bringing the vision into the mainstream.”

This year, Julia says she is most excited to lead the 3-mile family ride, and share the joy of the nearly-completed Connect Historic Boston trail with others.