The past couple of years have been rife with uncertainty, but there is one thing you can always count on - StreetTalks!

We brought back the most popular Livable Streets event - the StreetTalk 10-in-1 - now in a virtual format. The event featured 10 speakers from around the region and the country in a lightning round of presentations covering a wide range of topics, including transforming housing policy, the future of the MBTA and expanding the meaning of “safe” on our streets.

We kept things interesting with pop quizzes, polls and a lively chat discussion!

There is still a lot we don’t know about the future - but we do know we’ll need to advance strategies to combat climate change, tackle systemic inequity, and make our streets work for everyone. Hundreds joined us for an evening of inspiration as we heard about the great work being done by amazing people on the street level.

This event also served as the official kick-off for our Winter Tour de Streets event!

Anne Kiyono Calef is a Research Fellow at Boston Indicators, where her work focuses on the social and economic impacts of the COVID19 pandemic on the Greater Boston region. She recently completed a Master of City Planning degree from MIT where her work focused on school segregation, housing, and equitable economic development. Prior to MIT, she worked as a public school teacher and leader for six years. She holds a Master’s degree in Educational Studies from Johns Hopkins University and a BA in Asian American Studies from Pomona College.

Jesse Kanson-Benanav is the Executive Director of Abundant Housing MA where he oversees all aspects of the organization's mission to stand up for abundant housing for all in communities across Massachusetts. Jesse brings to this role nearly 20 years experience in the affordable housing industry where he's worked as a community organizer, policy consultant, and most recently as a developer of affordable homes at a number nonprofits serving Massachusetts and New England. Outside his professional career, Jesse became active in the grassroots pro-housing movement in 2012 as founder of A Better Cambridge (ABC) where he served as chair until 2019. Jesse's work with ABC was recognized as a "Game Changer" in 2016 by the Boston Globe for its positive contributions to the local economy, and he was recognized as a "Rising Star" by Metro Housing Boston in 2019. Jesse is a graduate of Oberlin College and has a Master of City Planning Degree from MIT. He lives in Jamaica Plain, Boston, with his wife and toddler. 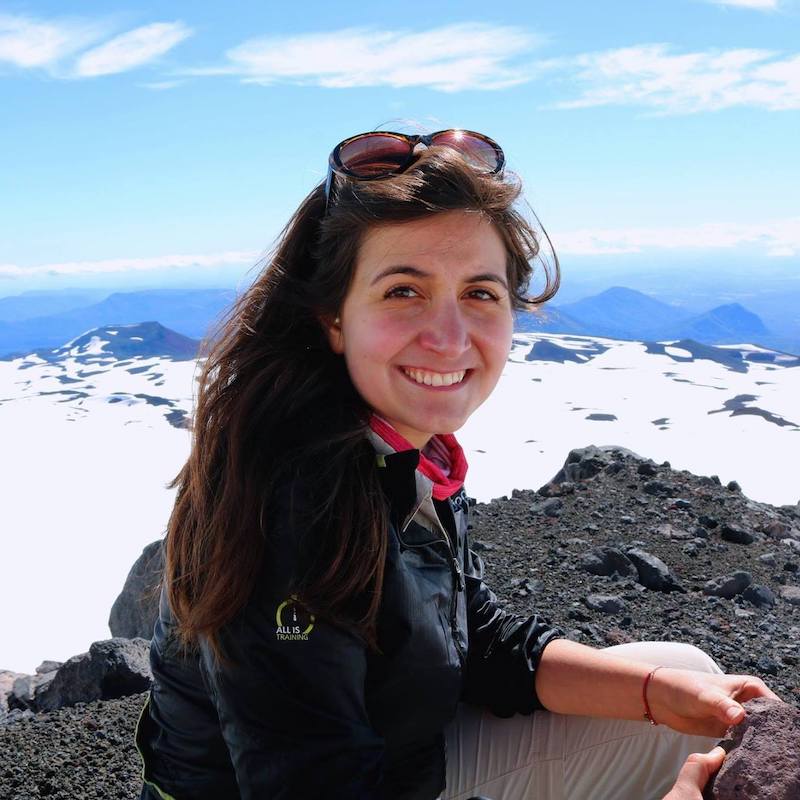 Luli is the Emerald Network Mobility and Environmental Systems Analyst at LivableStreets. Under the Emerald Network program's umbrella, she works on creating new links for the network, keeping existing greenways working appropriately, actively engaging community members, and addressing the environmental justice role of the network. She also oversees the progress along Columbia Road while leading our Gender and Mobility Initiative. When she finds some free time, she does data analysis for our Go Boston 2030 program. Luli is originally from Chile and uses her bilingual capacity to enable equitable communication every time she can. She bikes and walks all around the Metro Boston area, and, in her recreation time, you can find her walking her cats on the streets of Camberville. She has an Architecture degree from the Universidad de Chile and a Master in Landscape Architecture from Harvard Graduate School of Design. She is a designer who focuses on creating spaces that assure people's quality of life while helping the environment thrive—Luli advocates for social equity, ecological resilience, and gender justice in our streets design.

Christian MilNeil is the editor of StreetsblogMASS, a news outlet that's been covering sustainable transportation issues throughout the Commonwealth of Massachusetts since early 2019. He lives with his family in Portland, Maine, where he also serves as a volunteer commissioner for the local public housing authority.

Alaa is a New Mobility Planner at the Boston Transportation Department. She leads work on revamping the transportation development review process, which includes the Transportation Demand Management (TDM) point system, creating a methodology for maximum parking ratios for new large developments, and developing new tools such as the citywide bicycle level of traffic stress map. Alaa also managed the Boston Main Streets Free Public Transit Pilot, and is thinking about how the City can incentivize mode shift in a post-COVID world. Alaa last worked at the Metropolitan Area Planning Council (MAPC) in Boston where she was a Planning and GIS Analyst with the Data Services Department. She managed and led spatial and technical analysis for a wide variety of projects, including Housing Production Plans, transportation studies, and zoning projects. Alaa holds a bachelor’s degree in Architectural Studies from the University of Illinois Urbana-Champaign, and a Master in City Planning from the Massachusetts Institute of Technology (M.I.T.).

A.a.Ron Myers and Ed Word Galan are members of the Beantown Lockers, a Boston-based dance crew that specialize in Locking -- a funky style of dance from the 1970s. They are a dynamic duo who love music, dancing, and community building. A Trike Called Funk is a spin-off from a series of monthly pop-up performances they've been putting on over the last year. Coming through the pandemic, they wanted to bring people safely back together through music & dance while also supporting local businesses. And while they’re the Co-Founders of A Trike Called Funk but they’re not alone. They’re surrounded by an All-Star Team of advisors & collaborators specializing in music, bicycles, and start-ups who have helped them bring their creative venture to life.

As Executive Director, Gretchen Schneider Rabinkin AIA, Affiliate ASLA oversees operations and management of the Boston Society of Landscape Architects (BSLA) -- one of the largest, oldest, and most active chapters of the American Society of Landscape Architects. Gretchen works with the board to guide strategic direction, and serves as the administrative leader of BSLA and the BSLA Fund, including organizing design professionals in a variety of pro bono and community engagment initiatives. Prior to joining BSLA, Gretchen was Director of Civic Initiatives for the Boston Society of Architects(BSA) and BSA Foundation, including leading the Community Design Resource Center program. At the BSA, she initiated and helped coordinate community resiliency preparedness activities with multiple neighborhood and academic partners, organized the BSA Urban Design Workshops, and was on the steering committee for the Boston Living with Water International Design Competition. A licensed architect, she has long worked with individuals and community groups to improve and celebrate the public spaces of everyday experience. Gretchen led the architecture program at Smith College from 2000-2006, and has taught extensively. She is former deputy editor of ArchitectureBoston. Gretchen received a BA from Smith College and a MArch from the Harvard Graduate School of Design.

Jamey Tesler was named MassDOT Secretary and CEO on July 27, 2021. Mr. Tesler had been installed permanently as Registrar of the Massachusetts Registry of Motor Vehicles (RMV) in June of 2020, after serving in the role on an interim basis since June of 2019. As Registrar, Tesler has led the agency through a significant organizational overhaul, reprioritizing and bolstering the RMV’s public-safety related responsibilities especially with regards to accurate and up-to-date driver records and state to state communications, while also drastically improving the RMV’s business model to continue providing quality service options to customers during the COVID-19 pandemic by instituting an appointment-only system and enhancing online transaction capabilities, including an online learner’s permit test. These and other operational efforts, including the implementation of automatic voter registration and non-binary gender options on credentials, were further enabled by the final stages of RMV’s technology transformation project to ATLAS during Tesler's tenure. Tesler has worked for more than 16 years in senior management roles in the public sector, including as General Counsel to the Massachusetts State Treasurer, Deputy Legal Counsel in the Office of the Governor, Deputy General Counsel for the Massachusetts Bay Transportation Authority (MBTA), MassDOT Assistant Secretary for Procurement and Contract Management, Acting Chief of Staff for the Secretary of Transportation, and then as Chief Operating Officer at MassDOT. In April 2019, Tesler left state government for the position of Chief of Staff at Suffolk Construction prior to returning to work for the Commonwealth as Acting Registrar on June 25, 2019. Tesler received his bachelor’s degree in Economics and International Relations from the University of Pennsylvania and his Juris Doctor from the University of Michigan.

Monica G. Tibbits-Nutt, AICP, LEED AP BD+C, works in transportation planning, urban design, and transit equity. She is the Executive Director of 128 Business Council; is the former Vice-Chair of the MBTA’s Fiscal and Management Control Board; served on the Massachusetts Department of Transportation Board of Directors; and is the Vice-President of the non-profit Youth Engagement Planning (YEP!), which brings planning and community advocacy into K-12 environments. Working in regional planning and transportation, Monica’s areas of specialty are transportation planning, urban design, and transit equity. In both her work and research, Monica is particularly interested in capitalizing upon every opportunity to better educate transportation stakeholders and the public about all aspects of the planning process. Monica’s recent publications include “Technology for All: How Equity, Access, and Affordability Must Feature in Next-Generation Vehicle Policy” (2019), “A Road To Somewhere” (2017), and “What Intersectional Equality Really Looks Like” (2017).