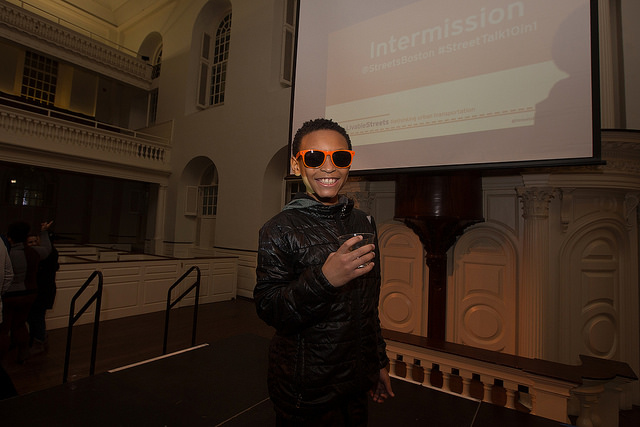 Highlights from the 6th Annual StreetTalk at Old South Meeting House included the MA Vision Zero Coalition's release of their Vision Zero Progress Report for Boston, and 10 short-form presentations demonstrating design, strategy, justice, and real stories that are helping to improve the streets in Metro Boston for everyone.

Kris Carter is a non-practicing engineer, an optimistic urban planner, and a self-taught filmmaker. New Urban Mechanics is the City of Boston's civic innovation team, working collaboratively with research institutions, civic entrepreneurs, and government agencies to explore and prototype what's new and next in cities. The New Urban Mechanics team works collaboratively across sectors to find human-centered solutions. Prior to leading the Mechanics, Kris managed the City's bicycle program, served as an advisor to Mayor on the creation of the Boston Innovation District, and helped operationalize One Fund Boston in response to the Marathon bombings. He spent half a decade running youth development programs, is an AmeriCorps alum, and has yet to find a job more difficult than raising twins. ​ 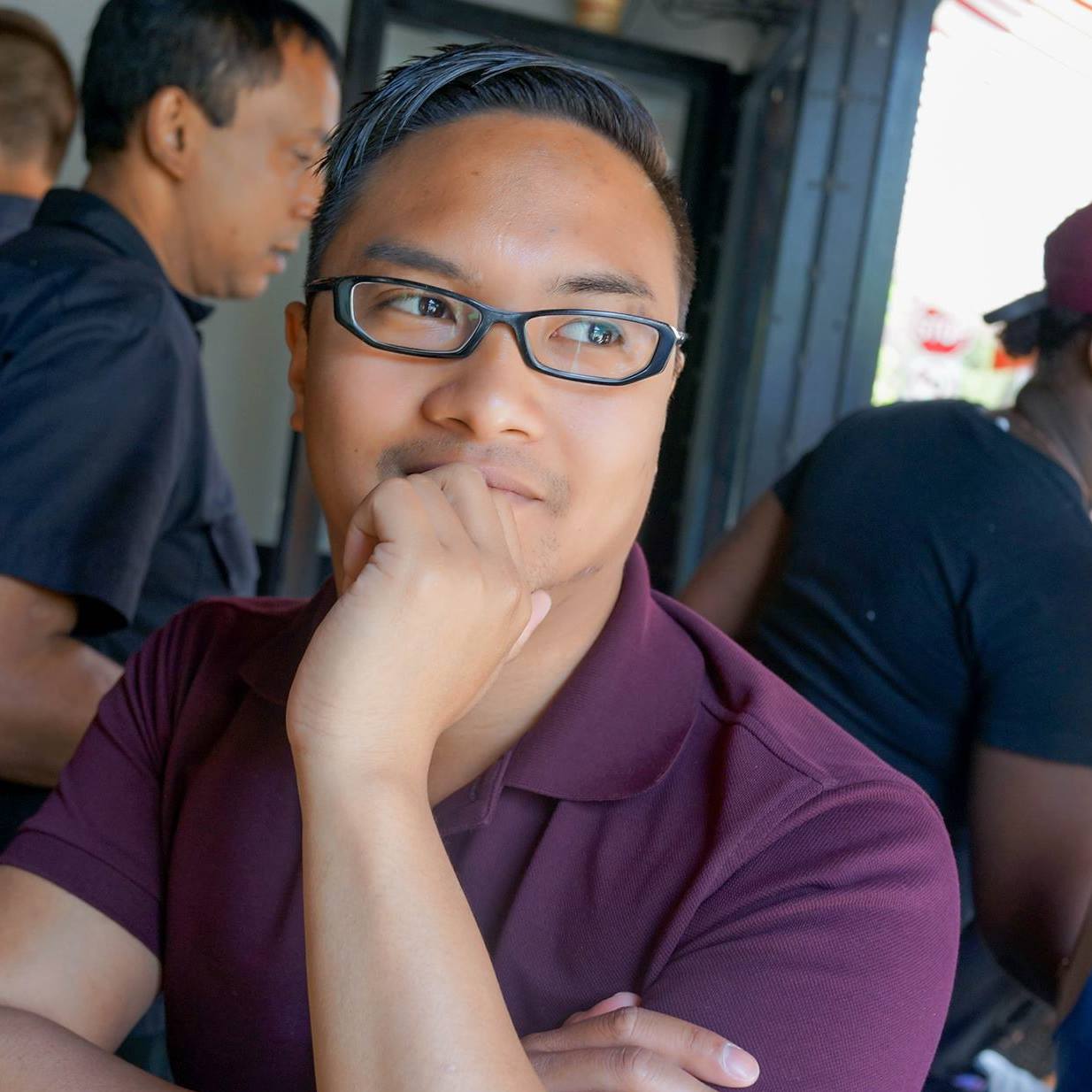 Marc Ebuña is the co-founder and president of TransitMatters, a nonprofit dedicated to improving transit in Greater Boston by offering new perspectives, uniting transit advocates, educating riders and promoting critical analysis of mobility issues. A self-professed Leslie Knope of transit, Marc enjoys geeking out over meeting transport celebrities and getting knee-deep in leading TransitMatter's social media and advocacy campaigns, like Overnight Bus Service. You may have heard him on TransitMatter's podcast.

Tamika Francis is the Community Engagement Manager, for the Let’s Get Healthy, Boston! (LGHB), a 3 year U.S Centers for Disease Control and Prevention’s Partnerships to Improve Community Health program to support implementation of voluntary policy and systems changes to encourage healthy choices in physical activity, nutrition and smoke-free housing. Her lived experiences, coupled with work in multi-sectors, led to her role as the engagement strategist, and key architect behind LGHB’s Healthy Community Champion & Ambassador programs - a partnership between the Boston Alliance for Community Health and the Boston Public Health Commission. She has strong Caribbean heritage, and has lived or worked on several islands on bilateral international development projects funded by the World Bank, USAID, and the European Union. She moved to Boston 10 years ago, where she immediately worked on various social justice issues. Tamika is driven by her curiosity and commitment to people-centered development and approaches that involve those most affected by a problem working towards a solution.

Michelle Cook is the founder of Roxbury Rides, where she encourages people in urban communities (Roxbury, Dorchester and Mattapan) to use biking & walking as a source of transportation and exercise. Roxbury Rides advocates for better, safer infrastructures for bicyclists and pedestrians. Through the Let’s Get Healthy Boston, Project! She became the first known Roxbury woman to become a Licensed Cycling Instructor (LCI) through the League of American Bicyclists, and served as a Spokes model and Healthy Community Ambassador for the city wide I Bike Boston campaign, and Moderator/Shero for the Boston Chapter of Black Girls Do Bike. This past summer she assisted Boston Bikes in their community process to select new Hubway sites across Roxbury and Dorchester.

Stas Gayshan is a Managing Director at the Cambridge Innovation Center (CIC) and the founder of CIC Boston. Stas is currently leading the development of CIC projects in Miami, Florida, Warsaw, Poland, and beyond, connecting innovators across boundaries and borders. Stas Gayshan joined CIC in early 2014. Previously, Stas was the Founder & CEO of Space with a Soul, a 20,000 square foot coworking space in Boston’s Innovation District. Stas is an entrepreneur and an attorney, and he worked in Democratic political campaigns at various levels prior to starting Space with a Soul. In his political work, Stas focused on the intersection of collaboration, technology and activism. Stas has been recognized by the Boston Globe as one of the Most Innovative People in Massachusetts Business and by CJP as one of Boston’s most influential young leaders. He holds leadership positions in several philanthropic and nonprofit organizations active in the Greater Boston area. Stas has a B.A. and J.D. from Boston College.

Nidhi Gulati is the Program Manager for the Emerald Network, an initiative of LivableStreets Alliance. The Emerald Network is a vision for 200 miles of seamless greenways across the Metro Boston area, creating an urban recreation and transportation system that is safe and convenient for all. Previously, Nidhi worked as a project associate and manager at Project for Public Spaces (PPS) in New York City. During her three years at PPS, she worked in over 15 states and 5 countries on community-based placemaking projects, and participated in several national and  international conferences. She received her Bachelor's degree in Architecture from Malaviya National Institute of Technology in Jaipur and a Master’s in Park and Community Planning from Texas A&M University in College Station. Born and raised in India, Nidhi has also been involved with several advocacy organizations and initiatives in the global south, and has made contributions related to developmental challenges, urban issues, as well as safety and equity in the public realm.

Nick Jackson is the Director of Toole Design Group’s Boston, MA office. As a senior planner, he brings over 12 years of experience in planning and designing sustainable transportation systems. Nick is highly regarded for his ability to build consensus around solutions for complex urban transportation problems. He recently led a project team of planners, engineers and architects to craft comprehensive new street design guidelines for the City of Boston – a first in that city’s history. Nick’s also played key roles in the emergence of Chicago and Boston as top-rated bicycling cities. Prior to joining Toole Design Group, Nick served as Deputy Director of the Active Transportation Alliance in Chicago, IL. A regular bike commuter, Nick has lived car-free for 10 years and also enjoys sailing, photography and graphic design.

Alex Krieger has combined a career of teaching and practice, dedicating himself in both to improving the quality of place and life in our major urban areas. Alex is the founding Principal of Chan Krieger Sieniewicz which merged with NBBJ in 2009. He is a Professor at the Harvard Graduate School of Design, where he has taught since 1977. During his tenure he has served as Chairman of the Department of Urban Planning and Design, Director of the Urban Design Program, and Associate Chairman of the Department of Architecture. Alex is a frequent advisor to mayors and their planning staffs, and serves on a number of boards and commissions. Among these: Director of the NEA's Mayor's Institute in City Design; Boston Civic Design Commission; Providence Capital Center Commission; and the New England Holocaust Memorial committee. In September 2012, President Barack Obama appointed Alex to serve on the U.S. Commission of Fine Arts.

Kevin Lee is an Associate Engineer at Kittelson & Associate focusing on multimodal operations. He has led planning, design, and implementation projects for transit preferential treatments taking a balanced approach for safe, effective, and efficient solutions. He is currently leading several projects implementing Transit Signal Priority at over 200 intersections across six agencies within the DC region. Kevin graduated from Purdue University with a Bachelor’s and Master’s in Civil Engineering. He is the chair of the Multimodal Systems subcommittee under the TRB Traffic Signal Systems Committee.

Wilnelia Rivera is an impact-driven urban planner and project management professional working at the intersection of people, planning, and politics. As a former organizer, political director and senior manager, she has a broad range of experience working with urban public sector institutions (small to mid-sized nonprofits, labor unions, and local and state government) in addition to political and social justice organizations. Wilnelia holds both a B.A. in International Relations and Women's Studies and an M.A. in Urban and Environmental Policy & Planning from Tufts University, as well as a past Mel King Fellowship recipient at Massachusetts Institute for Technology’s Co­Lab, where she focused on public policy research related to urban politics, community planning, and sustainable community economic development.

Chris Zegras is Associate Professor of Transportation and Urban Planning at MIT’s Department of Urban Studies and Planning (DUSP). He teaches, leads large-scale research, and consults on a range of topics, from data collection to behavioral analysis, integrated land use transportation planning and modeling, and project and policy analysis. He is Lead Principal Investigator for the Future Urban Mobility Interdisciplinary Research Group under the Singapore MIT Alliance for Research and Technology (SMART). He is also an Executive Board member of the Bus Rapid Transit (BRT) Centre of Excellence. At MIT, he leads the Mobility Futures Collaborative, a research group that leverages analog and digital data collection and analysis tools to mobilize a collective intelligence towards improved mobility conditions in a range of contexts around the world. Before becoming a faculty member at DUSP, he worked at MIT’s Laboratory for Energy and the Environment and the International Institute for Energy Conservation. He lives in Cambridgeport.