Our vision is simple - zero crashes and fatalities on our streets. A commitment to "Vision Zero" shifts the priority of transportation policies and projects from speed to safety, with the philosophy that crashes can be avoided if streets are designed to protect all people.

Cities and towns adopt Vision Zero with programs that focus on on the 6 Es – Education, Enforcement, Engineering, Encouragement, Equity, and Evaluation.

“In every situation in which a person might fail, the road system should not.” - Sweden’s Vision Zero Initiative video 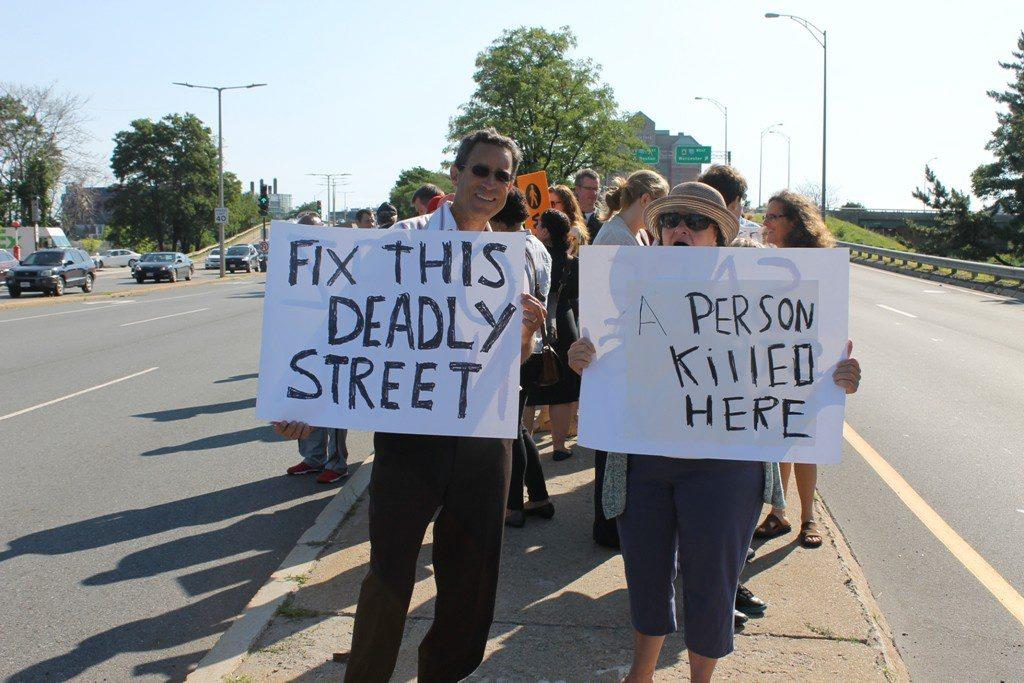 Vision Zero touches all aspects of LivableStreets’ work, as we aim to increase the livability, safety, and accessibility of our streets for all people using all modes of transportation. Here are some highlights of the work we've done so far:

Convened partner organizations in 2014—including WalkBoston, MassBike, and the Boston Cyclists Union—to build a coalition to call on the Mayor to commit to Vision Zero

Member of Boston Mayor Walsh Transportation Transition Team in Dec 2013-Jan 2014, of which the number one recommendation was Vision Zero

Participated in national #crashnotaccident social media campaign, providing a platform/template for people to tell their own #crashnotaccident story, increasing awareness of the public and media that all crashes are not accidents.

On March 25, 2015, Mayor Marty Walsh announced that the City of Boston is officially committing to Vision Zero Boston to shift the priority of transportation policies and projects from speed to safety, "based on the premise that traffic fatalities are not accidents, but rather they are crashes that can be prevented by effective policies and systematic evaluation, enforcement, engineering, education, and community engagement." The City of Boston formed a task force.

In Fall 2015, the Massachusetts Vision Zero Coalition launched its website, with the aim of advocating for the implementation of Vision Zero in Boston and for the adoption of Vision Zero throughout Massachusetts. The new and growing coalition includes community-based organizations, nonprofits, businesses, civic groups and individuals representing communities across the state.

On December 9, 2015, Mayor Marty Walsh announced the City of Boston's Vision Zero Action Plan. The Action Plan can be viewed at the Vision Zero Boston website.