Many years ago, I was hitch-hiking east from San Francisco. (It was 1967, the summer of love – but that’s another story.) Somewhere in Wyoming, at around 2 am, with no houses or streetlights for hundreds of miles, the car started making funny noises which, given our collective state of mind, sounded ominous. We pulled over, got out, and there it was – the biggest sky I, a city dweller, had ever seen. It was both darker and brighter than I would have thought possible. Stars. And more stars. Bursting out from a background that was beyond black. It was so amazing, so surprising, so beautiful that it almost felt spiritual. I ignored the car and just stared.

I’ve never seen anything like that again. Even worse, according to the International Dark Sky Association, unless something changes it’s unlikely that I ever will. Nationally, over-illumination is growing at more than a compounding 2.2% a year; actually, even higher because sensors don’t seem to register the short-wavelength blue light that is an increasing component of brighter LED and other sources. Some Massachusetts communities are brightening at ten times that rate! The skyglow of artificial light causes the sky to be 5–10 times brighter in urban areas than a naturally dark sky. We are losing sight of between 25 and 80 stars every day, between 1 and 3 per hour. About 80% of Americans, and at least a third of the world’s people, can no longer see the Milky Way. It’s a kind of blindness that we shouldn’t let ourselves suffer. 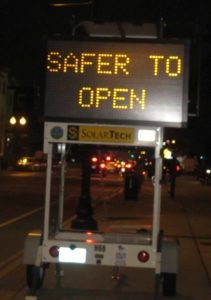 Sometimes a phrase, image, or idea is so responsive to a situation or mood facing some portion of the population that it just goes viral, spreading seemingly by magic.  But, in addition, there is always a hidden engine of someone’s energy (or some other investment of resources) turning the cultural gears.  The “Dutch Reach” – a.k.a. “Far Reach”, “Far Hand Reach”, “Right Hand Reach”, “Reach Across”, and “Safety Exit”, among others – is a case in point.  It is also an excellent example of how individual initiative still makes a difference even in today’s digital world.

Even though the mirror sticker says “watch for bikes” most of us forget to do it as we grab the door handle and push out.  Dutch Reach is the simple idea that car drivers should open their door by reaching over with their right hand (passengers with their left hand), thereby turning their body and head so that they have a clear view of their outside mirror (and, if their bodies are young and flexible, perhaps the road behind them), making it much more likely that they’ll notice if a bicyclist is approaching.  Waiting a few seconds before opening their door prevents them from accidently hitting the cyclist, knocking her into the street where she could – and tragically often does – get hit by a passing car or truck.  “Dooring” is one of the most common causes of injury and even death for urban bike riders; nearly every cyclist has regular N.D.E.s – near door experiences.  Dooring is a lot less likely to happen with the Dutch Reach.

It is always wonderful to watch a local advocacy campaign that does almost everything right. Especially when you both agree with their goals and like the people involved.

Look down the street.  It’s not just cars, trucks, buses, bikes, and pedestrians.  There is a whole spectrum of new two and three wheeled things on the roll – stand-up scooters, in-line skates, skate boards both manual and motorized, Segways, “personal assistant mobility devices”, electric-assist pedal bikes, motorized cargo bikes and pedicabs, mopeds, mini-motorcycles, “smart wheels” that fit onto regular bikes, exploding hoverboards, and other things joining the motor scooters and motorcycles already there.  And next year there will be even more as several industry sectors – bicycle, moped, and scooter manufacturers in particular – gear up to serve the growing market of bike-interested but less-physically fit adults and aging boomers.

The cliché is true: every trip begins and ends on foot.  The basics of what makes for a good walking experience are pretty straightforward:  smooth, wide, unobstructed and well-lit surfaces; stress-free street crossings; pleasing aesthetics; busy but not overcrowded; hassle-free and crime-free areas; opportunities for social or commercial activity; and a way to get to where you want to go.  In fact, policies about pedestrian facilities are generally decent – it’s the implementation that gets controversial.

Although the increasing numbers of people who step into a street with their eyes lost in a screen and their ears blocked with music are asking for trouble, the starting point for road safety must be that as the most vulnerable of road users, pedestrians (on foot or wheelchair) deserve the most protection and should be yielded to by everyone.  However, because every situation has its own particularities, most policies and standards appropriately provide enormous lee-way for on-the-spot judgement by the individual designer or traffic signal controller.   And the devil is always in the details of what gets decided, particularly in the (deliberate or implicit) weighting given to car traffic versus pedestrian (and bicycle) movement.  Here are some ideas about how things should go.

The combination of huge blind spots in the driver’s vision (especially from the cabs of the biggest and tallest trucks), the pressure drivers are under from their companies to increase their loads and cut their time, and the lack of city-specific commercial driver training in the US – all add up to nearly inevitable tragedy.

There are some defensive tactics that pedestrians and bicyclists can use. Unfortunately, these are not fool-proof and not enough to prevent tragedy. What is also needed are systemic changes in both truck drivers’ ability to see what’s around them, and the availability of training resources to help truck drivers operate more safely in urban areas.

Accomplishing these two changes requires changes in public policy. Public policy changes slowly and with great difficulty – it is constitutionally designed to have multiple steps and, because our political system is so dependent on business support, it is repeatedly subject to vested-interest push-backs. However, progress is happening. This summer, D.C. became the first state to pass a side guard and mirror law for all large trucks. A truck side-guard and blind-spot mirror bill is advancing in New York State, with New York City as a major sponsor. A similar bill was introduced in last year’s session of the Massachusetts Legislature – it will hopefully get more traction when it’s re-introduced this year.

Better Bike Lanes: Improving On What Got Us Here

Except for the boldest and most confident people, even experienced cyclists feel more comfortable – and more people are likely to use their bikes – when they are separated from fast moving or heavy traffic.  So it’s not surprising that the spread of standard bike lanes – a painted corridor sometimes against the curb but usually between parked cars and moving traffic – has been a powerful catalyst for the growth of cycling in recent years. Since safety comes from numbers, these facilities have significantly lowered the risk and improved the environment for bicycling.  Research shows that standard lanes increase the distance between cyclists and both moving and parked cars compared to unmarked streets -- nudging parked cars closer to the curb and bicycle riders further away.  But experience has also taught us that the next-to-the-driver-door location has significant flaws and that it’s possible to do better.  A lot of great design ideas have been developed.  However, outside the advocacy community, many people still haven’t heard about them.  Here is an introduction to a few of them.

Road Rage is aggressive anger and dangerous behavior.  It carries overtones of self-righteous arrogance and potential violence.  It’s incredibly scary and deeply disturbing, especially as the number of carried guns and the amount of culture-permeating violence increases.  To reduce our chances of becoming the victim – or the initiator – of road rage, we need to de-escalate tense situations.

When confronted by an emotionally out of control or threatening person, our first act must be to remove ourselves to safety.  More often, however, we are faced with an unintentionally and unknowingly endangering behavior by a thoughtless person.  Both situations are frightening and infuriating, but exploding in anger is not usually our best response – either in its deterrence effect or its impact on ourselves.  Anger may sometimes give us a feeling of regaining control, but makes others see us as being out of control.

Sometimes, even merely trying to assertively deal with the situation triggers fury rather than understanding, potentially creating an escalating feedback loop that spirals out of control into emotional or even physical injury.  Sometimes, we need to walk away – for our own sake.  Without compromising our right to be on the roads, the route towards more civil interaction is to always try to make ourselves part of the solution rather than part of the problem.  We need to be true to our better selves, doing what we can to make our streets safer and more welcoming places for everyone. Our goal must always be to make our roads friendly at the level of interpersonal interaction as well as mode interaction – which also implies the importance of improving our street design, of adopting and implementing Compete Streets and Vision Zero programs.

A panel discussion organized by Ken Carlson, chair of the Somerville Bicycle Committee, prompted some thoughts and this blog.  (Full disclosure: I moderated the session and will lead another panel at MassDOT's upcoming Moving Together Conference.)  I’m writing this from the perspective of being a year-round cyclist who occasionally drives a car or takes transit, and starts or ends every trip with some distance on foot.

The Death and Legacy of Bike Culture: An Appreciation

You don’t hear a lot about “bike culture” these days. A decade or two ago it was a hot phrase, denoting the shared camaraderie, courage, outsidership, feeling of rebellion and excitement of being a cyclist in a world that considered you slightly crazy. (If society treats cyclists as deviants doing an insanely dangerous activity; who else would you expect to become a cyclist beside a risk-taking person with a certain disregard for the rules?) But it also had a powerful democratic and moral vision that said being on a bike was a positive thing that everyone could and be encouraged to do; that it was our roads that were irrational rather than those who didn’t use cars. Like Punk, bike culture was an urban phenomenon, based among weekend racers, daredevil messengers, and the spandex covered hot-rodders joining the others in marginalized outlaw status on the streets. Today, as bicycling has become more mainstream, the macho desperado aspects of the culture have receded to the immature margins and the universalizing positive messages have been carried forward in the nation’s many Bicycle Advocacy and Transportation Reform groups. But here’s a semi-nostalgic glance back at the people who pushed through the asphalt barbed wire to get it all started.

Roads are for moving on. But they are also for being in. There is a growing effort to reclaim the historic role of streets as a neighborhood’s collective front yard, a place for people to meet and talk, to sit and look or eat, and for their children to play.  From temporary Play Streets and Open Streets to more permanent Shared Space, Neighborways, and Slow Zones, there are a growing menu of strategies for combining the two roles of streets as travel corridors and public space – the largest single asset owned by most local governments. And along with these is a re-emergence of “traffic calming” as a positive goal.